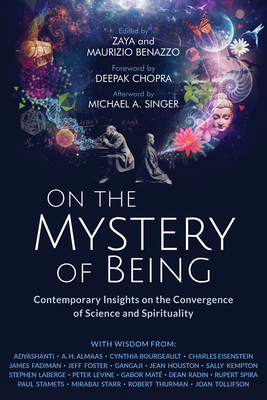 On the Mystery of Being

Contemporary Insights on the Convergence of Science and Spirituality

Zaya Benazzo is a filmmaker from Bulgaria with degrees in engineering, environmental science, and film. For many years, she worked as an environmental activist in Holland and Bulgaria, and later produced and directed several award-winning documentaries in Europe and the United States. Maurizio Benazzo grew up in Italy, and in 1984 came to the United States on a ninety-eight-year-old sailing boat. He started working as an actor, model, and filmmaker, but his thirst for knowledge was only satisfied in 2001 upon encountering I Am That, the seminal work by Sri Nisargadatta Maharaj, while he was in India shooting the award-winning documentary Short Cut to Nirvana. Maurizio and Zaya merged their lifelong passions for science and mysticism when they met in 2007, and their first project together was filming the documentary Rays of the Absolute on the life and teachings of Sri Nisargadatta Maharaj. This project sparked their next level of creation and collaboration: Science and Nonduality (SAND)--a global community inspired by the timeless wisdom traditions, informed by modern science, and grounded in direct experience. Foreword writer Deepak Chopra is author of more than seventy books, including numerous New York Times bestsellers. His medical training is in internal medicine and endocrinology. Afterword writer Michael A. Singer is author of the New York Times bestseller, The Untethered Soul, which has also been published in numerous languages around the world
Loading...
or
Not Currently Available for Direct Purchase