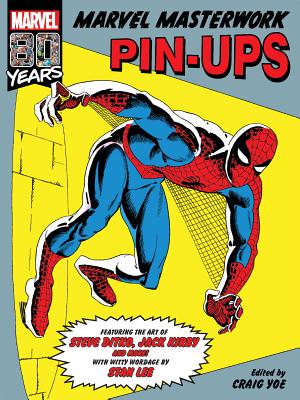 True believers, thrill to pulsating pin-ups by some of the greatist comic artists of all time!

As part of the tremendous fun of Silver Age comics, artists created pin-ups of the most popular Marvel heroes and villains! Now the greatest of those works of art are gathered for the first time in a beautiful large-format hardback book! Included are rare examples of original art of The Thing, Spider-Man, and Dr. Strange.

Vice magazine has called Craig Yoe the "Indiana Jones of comics historians." Publisher Weekly says he's the "archivist of the ridiculous and the sublime" and calls his work "brilliant." The Onion calls him "the celebrated designer," The Library Journal, "a comics guru. " BoingBoing hails him "a fine cartoonist and a comic book historian of the first water." Yoe was Creative Director/Vice President/ General Manager of Jim Henson's Muppets, and a Creative Director at Nickelodeon and Disney. Craig has won an Eisner Award and the Gold Medal from the Society of Illustrators.
or
Buy Here
Copyright © 2020 American Booksellers Association