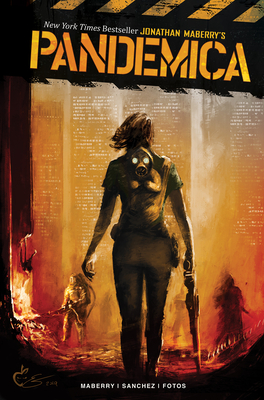 Join the resistance and save the world in this graphic novel from New York Times bestselling author Jonathan Maberry!

War is brewing in America. A shadow government is preparing to launch "purity bombs" for ethnic cleansing, but there are things worse than death. Designer pandemics are colliding and mutating, pushing humanity to the edge of permanent darkness. One child holds the key to human survival or extinction and everyone is hunting for her but a small group of scientists and former SpecOps shooters stand in their way.

Jonathan Maberry is a New York Times-bestselling author and five-time Bram Stoker Award-winner. His other projects include Rot & Ruin, V-Wars, the Joe Ledger series of novels, and The Pine Deep Trilogy among many others.

"Pandemica is horrifying to start with because it feels very realistic and reflective of the times we live in. It’s clever, it’s dark, and it carries an authentic feel throughout." --Comics Bookcase

“This book is seriously amazing. The pace at which the story flows feels like this has more pages than it does and not once does any of it feel rushed or out of place or even glossed over. We get a story about hatred, violence and passion all of which can be seen and viewed from various viewpoints throughout the book. So well-rounded is the writing here and with the interiors this makes for the most compelling read you could possibly find on stands today." --Reading With A Flight Ring

Among his numerous book and comic credits are the shared-world anthologies V-Wars and its sequels, V-Wars: Blood & Fire, V-Wars: Night Terrors, and V-Wars: Shockwaves; the X-Files short story anthologies The Truth Is Out There, Trust No One, and Secret Agendas; the V-Wars comic series; and the comic series adaptation of his zombie novel Rot & Ruin; all from IDW Publishing.
Loading...
or
Not Currently Available for Direct Purchase