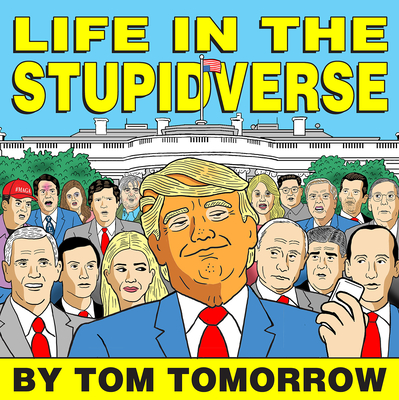 Life in the Stupidverse (This Modern World)

Welcome to the Stupidverse! Good luck finding an exit.

Relive all the trauma of the first several years of the Trump presidency through the Pulitzer-nominated cartoons of Tom Tomorrow! You've never laughed quietly to yourself so much at humanity's impending doom!

It's a hilarious but nightmarish trip down memory lane, from the Great Inaugural Crowd Size debate to the nomination of Bret ("I LIKE BEER") Kavanaugh, from Muslim bans to concentration camps, from the Mueller report to the latest outrageous thing you just read about this morning -- Tom covers it all so you can hide in bed with a blanket over your head and pray for that asteroid to finally hit the planet.

And don't worry, readers, the show is far from over. This merry-go-round of pain goes on and on, and Tom Tomorrow will be there, er, tomorrow. At least, until Trump finds a way to have him deported.

Praise For Life in the Stupidverse (This Modern World)…

"Turn off your TV! Shut down your computer! Tom Tomorrow has a laugh out loud gift for us. His latest book of cartoons, Life in the Stupidverse, is like a living, wriggling, ever expanding bag full of chittering, giggling, twittering Tribbles reproducing and multiplying itself. It’s wit, insight and – of all things – hope for the future of our democracy. Oh My!" — George Takei

"Panel for panel, no comic strip captures the toxic depravity of the Trump Administration quite like This Modern World. It can't be easy to satirize self-parody, but Tom Tomorrow does so with a deadpan glee that's simultaneously hilarious, insightful & tragic. #PulitzerWorthy." —Mark Hamill

"Tom Tomorrow makes me laugh about the world today—and if you’ve seen the world recently, you know what an actual miracle that is." — John Scalzi

"I’ve been a huge fan of Mr. Tomorrow’s work since I was a wee lad, and having meticulously studied his writing for many years, I’m afraid I’ve come up with a rather disturbing conclusion: some of our elected officials may not always have our best interests at heart. I’m very sorry I had to be the one to tell you this." — Weird Al Yankovic

Tom Tomorrow (Dan Perkins) is the creator of This Modern World, a weekly cartoon of political and social satire which is featured on The Nation, Daily Kos, and The Nib, and which has been a mainstay of the alternative press for twenty-five years. His work has also appeared in publications including The New York Times, the New Yorker, Esquire, Spin, Mother Jones, US News and World Report, the Economist, and many others. He is a two-time recipient of the Robert F. Kennedy Journalism Award, the 2013 recipient of the Herblock Prize for editorial cartooning, and a 2015 finalist for the Pulitzer Prize. He is the author of ten cartoon compilations and one book for children, and in 2009 created the artwork for the Pearl Jam album Backspacer.
Loading...
or support indie stores by buying on