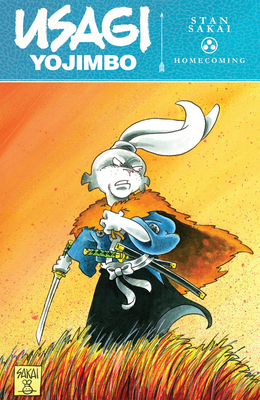 Volume Two of the new series sees Usagi return to his home province to pay his respects, but ghosts from his past have other plans.

In "Tatami," Usagi returns to his home province only to find intrigue and betrayal! An important tea ceremony is about to take place, but what sinister plan does Lord Hikiji have for it and how are the Neko ninja clan involved?

Then, in "Mon," long ago, Lord Hikiji defeated Usagi's Lord Mifune to take control of the Northern Province. Usagi, now traveling through his old territories, still wears the mon (a family crest) of his former lord. But, there are those who still remember the Great Wars with bitterness and threaten to kill any samurai loyal to Mifune. What happens when they come across Usagi?

In "The Return," Usagi is on a pilgrimage to his late lord's gravesite, however, wearing the Mifune clan crest in Lord Hikiji's territory has made him an enemy. Traveling through this dangerous land he has made his way to the one place he had been avoiding--the village in which he grew up. Bittersweet memories awaken with his long-time love, until the village becomes embroiled in a plot to assassinate an emissary of the shogun.

Collects issues #8-14 of the all-new full-color Usagi Yojimbo series published by IDW and features an Introduction by artist Peach Momoko.

"Every issue of Usagi Yojimbo reads like a gift, which makes the truly exceptional installments like "Mon" in Usagi Yojimbo: Homecoming the brightest stars in the metaphorical sky of comics." —ComicBook.com

Stan Sakai began his career by simply lettering comic books as he perfected his art and began working in the industry. He also wrote and illustrated The Adventures of Nilson Groundthumper and Hermy; a comic series with a medieval setting, influenced by Sergio Aragones's Groo the Wanderer. The characters first appeared in Albedo #1 in 1984, and were subsequently featured in issues of Critters, GrimJack, Amazing Heroes and Furrlough. Stan Sakai became famous with the creation of Usagi Yojimbo, the epic saga of Miyamoto Usagi, a samurai rabbit living in late-sixteenth and early-seventeenth-century Japan.
Loading...
or support indie stores by buying on