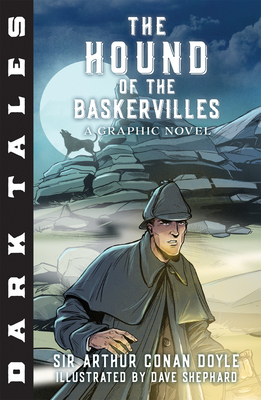 The Hound of the Baskervilles: A Graphic Novel (Dark Fairy Tales)

Eliminate the impossible, and whatever remains, however improbable, must be the truth. This classic "whodunit" story with the famous Sherlock Holmes and Dr. Watson is now told in graphic novel format. More than 100 pages of illustrated action and adventure Sir Charles Baskerville, master of the Baskerville estate, is found dead at the gates with a look of horror on his face. Sherlock Holmes and Dr. Watson are called in to investigate the possibility of foul play. After several false leads, they solve the mystery and reveal the truth.

Dave Shephard moved down to the south coast of England to study illustration at Brighton College many years ago. A love of drawing and sea swimming made the town a natural fit. Since then, he's worked in the wonderfully varied and ever-evolving world of illustration. He specializes in books for teens and younger readers, as well as graphic novels. Arthur Conan Doyle (22 May 1859-7 July 1930) was a Scottish physician and writer, most noted for his stories about the detective Sherlock Holmes, which are generally considered a major innovation in the field of crime fiction. He was a prolific writer whose other works include science fiction stories, historical novels, plays and romances, poetry, and non-fiction.
or
Not Currently Available for Direct Purchase
Copyright © 2020 American Booksellers Association