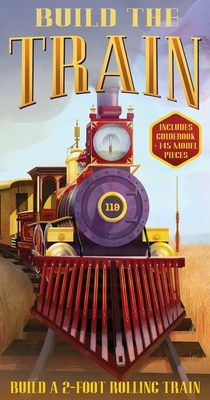 Ride the rails with Build the Train, and construct a 2-foot-long rolling train model.

Get ready to ride to the rails with the newest title in the best-selling Build the… series: Build the Train! This interactive guide features trains from around the globe and comes with a tuck box containing pre-cut pieces to build a beautifully artworked 19th-century steam train with moving wheels. Learn all about trains, their history and engineering—from steam to high-speed—including how each different type of engine works and the variety of trains that exist around the world. Discover how steam engines work, the difference between electric and diesel, and how different countries creating trains with higher speeds and increased capacities. This wonderful book captures the romance of trains and combines it with interesting information on the nuts and bolts behind train travel.

Philip Steele worked for the Hodder group, Hamlyn, and Macdonald Educational where he edited children’s information books. In the 1980s, he set up as a freelance writer and publishing consultant and has been writing ever since. He has written numerous titles on history, the natural world, social issues, and lands and peoples. Well-known series and publishers Philip has written for include DK Eyewitness, e-encyclopedia, Kingfisher, Franklin Watts, and National Geographic. Philip is based in the UK.

Gregor Forster is a trained visual artist with specialization in scientific illustration. Besides using illustration and animation to support scientific content, he paints and draws to tell stories. Gregor lives and works in Zurich, Switzerland.
or support indie stores by buying on
Copyright © 2020 American Booksellers Association