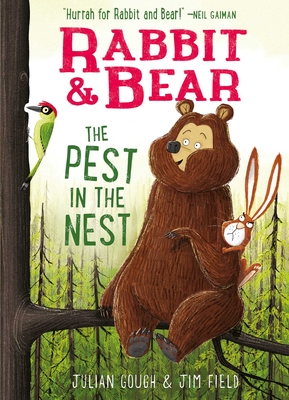 The Pest in the Nest

Cheeky, delightful, and hilarious, the next title in the Rabbit & Bear series is a roller coaster ride of fun!

What with his friend Bear’s snoring, and a BANG! BANG! BANG! noise from up in the tree, Rabbit knows that Something Simply Has To Be Done. But high in the branches, perhaps Bear can show Rabbit how to see the world from a different perspective. A story of friendship, wisdom, and how to be REALLY NOISY, this delightful and hilarious illustrated book is another fun read for Rabbit & Bear fans.

Jim Field is an award-winning illustrator, character designer, and animation director. He grew up in Farnborough, worked in London, and now lives in Paris. His first picture book, Cats Ahoy!, written by Peter Bently, won the Booktrust Roald Dahl Funny Prize. He is perhaps best known for drawing frogs on logs in the bestselling Oi Frog. He likes playing the guitar and drinking coffee.

Praise For Rabbit & Bear: The Pest in the Nest…