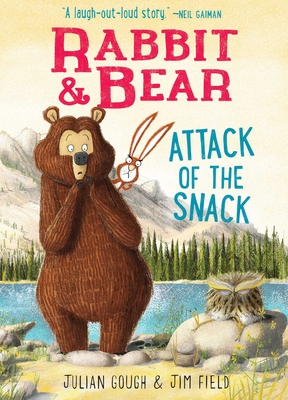 Attack of the Snack

It's time for another Rabbit and Bear adventure!

SPLASH! A Mysterious Thing lands in Rabbit and Bear’s peaceful summer lake. Is it exciting, or terrifying? Is it a tiny fluffy owl, or a huge hungry monster? And has Rabbit finally met a creature with worse habits than himself? Rabbit’s SURE he can solve this mystery. But when he accidentally turns the Best Day Ever into the Worst Day Ever, he needs Bear’s help...

Rabbit and Bear lead readers on a fantastic adventure in this tale of friendship, acceptance, and what you can do with blueberry poop.

Praise For Rabbit & Bear: Attack of the Snack…

“Rabbit and Bear: Attack of the Snack is a humorous, touching story that’s perfect for new and intermediate readers.” —Foreword Reviews

“A pointed jab at wanton fearmongering, lightened by a bit of philosophy and rather a lot of gas.” —Kirkus

Jim Field is an award-winning illustrator, character designer, and animation director. He grew up in Farnborough, worked in London, and now lives in Paris. His first picture book, Cats Ahoy!, written by Peter Bently, won the Booktrust Roald Dahl Funny Prize. He is perhaps best known for drawing frogs on logs in the bestselling Oi Frog. He likes playing the guitar and drinking coffee.
Loading...
or support indie stores by buying on