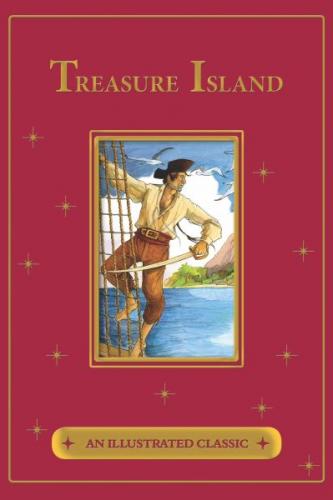 A tale of buccaneers and buried treasure to shiver yer timbers!

In Robert Louis Stevenson’s classic adventure, “X” marks the spot! Captain Billy Bones arrives at an innkeeper’s lodge and tells young Jim Hawkins to keep a weather eye open for a one-legged seafaring man. But after several nefarious fellows show up, Jim is left with the map to buried treasure. All ages will enjoy this timeless tale of treachery and heroism that has shaped the modern image of pirates. Bound in a beautiful cloth cover with full-color illustrations inside and foil stamping on the front, this exciting volume in our Illustrated Classics series will be a welcome addition to any home library.

Robert Louis Stevenson (1850–1894) was a well-respected Scottish writer. With a propensity toward imaginative thought and rebellious philosophies, Stevenson traveled throughout the world during his life, using his experiences in much of his writing. His two best-known stories, Treasure Island and Dr. Jekyll and Mr. Hyde, are classics of Western literature.
Loading...
or
Not Currently Available for Direct Purchase