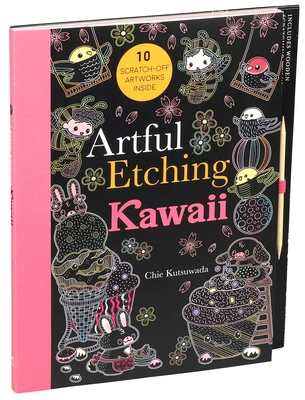 Etch ten adorable kawaii scenes and add as much colorful cuteness as you desire.

Cuteness is everywhere in Artful Etching: Kawaii! This Japanese cultural phenomenon, which emphasizes a childlike love for all things cute and charming, has spread across the world—and now you can create your own kawaii scenes on the pages of this book. By etching away the outlines on each of the ten boards with the included etching tool, you’ll reveal the bright, vibrant colors underneath. Then add as much detail as you want in order to create your own unique designs. An introductory section describes how to etch the scenes for the best results, and examples of finished pieces are included for reference.

Chie Kutsuwada is a UK-based Japanese manga creator and illustrator. After graduating from the Royal College of Art, London, she focused on creating shoujo manga designs, which are very delicate and romantic in style. She creates stories as well as illustration, such as King of a Miniature Garden in The Mammoth Book of Best New Manga II (2007) and Moonlight in The Mammoth Book of Best New Manga III (2008), which was shortlisted in the Manga Jiman competition organized by the Japanese embassy. Her books are available in many English-speaking countries and some have also been translated and published in Turkey, France, Italy, and Spain. Chie also attends many manga-related events in and out of the UK and runs manga workshops at schools, libraries, and museums including the British Museum, the British Library, Wellcome Collection, and the V&A Museum. She has also worked on projects for Channel 4 and CNN.
Loading...
or support indie stores by buying on