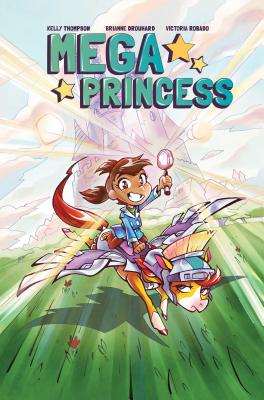 Max has the powers of every princess ever . . . too bad she just wants to be a detective.

Budding detective or princess in training? These are just a few of the questions Princess Maxine Titan must ask herself on her tenth birthday. See, turning ten is the very important day when every princess meets her very own fairy godmother and receives a special gift. When Max is bestowed with the powers of every princess in the known universe she longs to reject this clichéd royal convention and follow in the footsteps of her greatest heroes: Philip Marlowe! Sherlock Holmes! Miss Marple! Poor Max fears her detective career may end before it starts, that is, until her baby brother is kidnapped...

Written by Kelly Thompson (Jem and the Holograms) and illustrated by Brianne Drouhard (Harpy Gee), Mega Princess follows Max and her trusted steed Justine (aka “jerk pony”), as they navigate strange new powers, wonderous lands, and their own conflicted friendship in an journey to find out who took Prince Bobs and what greater forces are at play in the kingdom.

"Brianne Drouhard’s animation background is an obvious influence on the vitality of the characters and the richness of the environment. The reader can almost see them moving as they argue or gesture or travel to a variety of imaginative lands . . . There’s lots here for readers of all ages to appreciate . . ." --SCHOOL LIBRARY JOURNAL