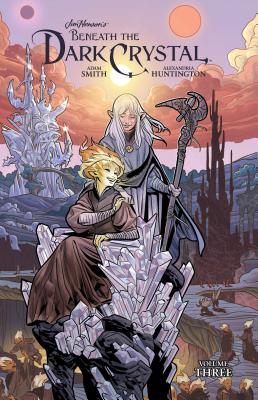 The stunning conclusion to the new sequel to the Dark Crystal film as two kingdoms must put aside their differences to combat a new enemy that threatens them all!

THE NEW SEQUEL TO THE HIT DARK CRYSTAL FILM CONCLUDES! Thurma and Kensho have discovered shocking truths and must return to their homelands, but they may not be welcomed back to Thra and Mithra as heroes. But when a new enemy more powerful than they could have imagined makes their move, these two kingdoms will have to find a way to join forces for the final battle that will change their very destinies. Writer Adam Smith (Jim Henson’s Labyrinth) and rising-star artist Alexandria Huntington conclude their epic as Kensho and Thurma are faced with the ultimate decision! Collects Jim Henson’s Beneath The Dark Crystal #9-12.

Jim Henson was an American puppeteer, animator, cartoonist, voice actor, inventor, filmmaker, and screenwriter who achieved worldwide notice as the creator of The Muppets, The Storyteller, The Dark Crystal, Labyrinth, and Fraggle Rock.
Loading...
or support indie stores by buying on
(This book is on backorder)