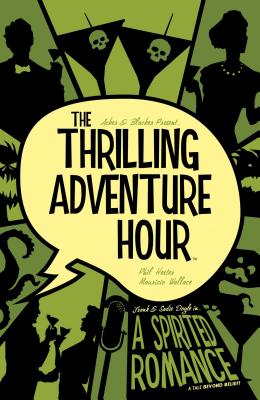 Based on the popular Hollywood stage show and podcast, The Thrilling Adventure Hour: A Spirited Romance follows fan-favorite characters Frank and Sadie Doyle in “Beyond Belief”.

It’s time to send the little ones to dreamland and set your radio’s dial to “spooky.” Steel yourself for mysterious suspense in…BEYOND BELIEF!

Meet Frank and Sadie Doyle, toast of the upper crust. Headliners on the society pages. And, oh yes, they see ghosts. Trading quips and tossing back cocktails, the Doyles take what they want and hoodwink their clientele for the rest. Ghosts, vampires, werewolves, mummies, even diabolical gingerbread men are nothing but obstacles in the way of the liquor cabinet for our fast-talking, hard-drinking sleuths.

Written by the creators of the wildly popular Hollywood stage show and podcast, Ben Acker and Ben Blacker (Deadpool, Star Wars Adventures), and illustrated by Phil Hester (Batman Beyond), The Thrilling Adventure Hour: A Spirited Romance is a rip-roaring adventure that harkens back to the heyday of old-time radio entertainment.

Writer/artist Phil Hester's credits include SWAMP THING, ULTIMATE MARVEL TEAM-UP, CLERKS: THE LOST SCENE, THE CROW: WALKING NIGHTMARES, THE WRETCH (nominated for the 1997 Eisner Award for Best New Series), ALIENS: PURGE, and GREEN ARROW. He resides in Iowa with with and their 2 children. Portland resident Brian Churilla is the acclaimed artist of such titles as REX MUNDI, THE ENGINEER, and CREEPY. 2009 saw the launch of his original webcomic THE D.B. COOPER DIARIES.
Loading...
or support indie stores by buying on
(This book is on backorder)