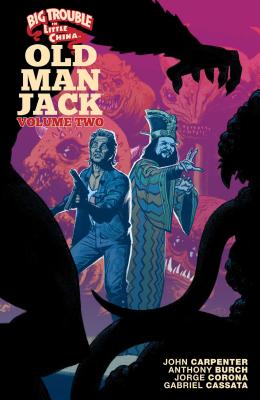 The authorized sequel to the cult hit film Big Trouble in Little China, co-written by its creator, John Carpenter.

Getting old ain’t ever easy. Especially when you’re entering your golden years during the apocalypse. Jack Burton’s haphazard quest to save the world and defeat the evil Ching Dai continues here. But to get the job done he’ll need the help of some old friends, Wang Chi and Egg Shen. The question remains, do they want to help him?

Written by horror icon, John Carpenter, with Anthony Burch (Borderlands 2), and illustrated by Jorge Corona (We Are Robin, The Flash), Big Trouble in Little China: Old Man Jack Vol. 2 collects issues #5-8 of the authorized, in-continuity sequel to the fan-favorite film.

Anthony Burch is an actor and writer, known for Hey Ash, Whatcha Playin'? (2008), Anime Crimes Division (2017) and Tales from the Borderlands: A Telltale Games Series (2014). In addition, he has worked at Riot Games (League of Legends), and wrote Big Trouble in Little China: Old Man Jack for BOOM! Studios. He was listed as one of Forbes' 30 Under 30 in 2015.
or support indie stores by buying on
Copyright © 2020 American Booksellers Association