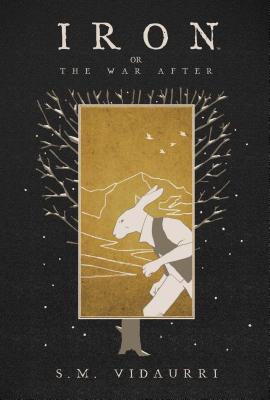 Or the War After

It is the aftermath of a long war, in a world of constant winter.

When an intelligence spy from the Resistance — the rabbit, Hardin — steals secret information from a military base of the Regime, his actions set off a chain of events that reverberates through the ranks of both sides, touching everyone from the highest-ranking officials to the smallest orphaned child. When the snow finally settles, who will be the true patriot and who the true traitor?

Iron or The War After marks the debut graphic novel from storyteller S.M. Vidaurri (Iscariot), who weaves a heartfelt fable shrouded in political intrigue.

S.M. Vidaurri was born and raised in northern New Jersey. He lives and works in New York. He received a BFA in Illustration from the University of the Arts in Philadelphia. His apartment is filled with many animals. He likes romance novels and superhero movies. His first graphic novel Iron: Or The War After was published in 2012 and was nominated for the Graphic Album category in the Pépites 2013 Salon de Montreuil. His work was also featured in Locust Moon's Little Nemo: Dream Another Dream which won for Best Anthology in the 2015 Eisner Awards.
or support indie stores by buying on