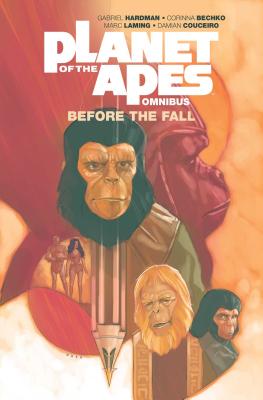 Planet of the Apes (Paperback)

Before the Fall Omnibus

Twenty years before an Astronaut named Taylor fell from the stars, the Planet of the Apes is gripped with a cataclysmic crisis between Apes and Man!

Ape society is in flux. The rigid caste system is breaking down. Humans can't speak and are considered animals, but are tolerated in the City. Scientific curiosity is smashing old taboos. But not everyone is happy with the new status quo. When an Ape general named Aleron discovers that the Lawgiver’s most sacred commandment—Ape Does Not Kill Ape—has been broken, he unwittingly unlocks a vast conspiracy deep in Ape City that will upend society, and all of history. On the run and faced with unspeakable betrayal, Aleron crosses paths with Doctor Zaius, Zira, Cornelius, and others as he journeys into the heart of the Forbidden zone to discover the truth.