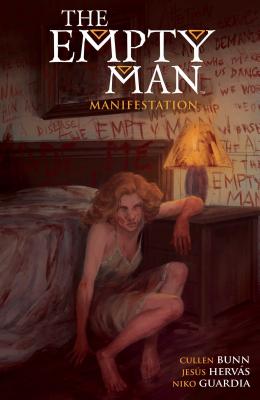 It’s the nation’s final chance to stop the terrible Empty Man pandemic from completely taking over, as the Kerry family fights against their own personal armageddon.

The Empty Man has gone viral -- not just pathologically, but also through the airwaves as cultists broadcast their “message” of indoctrination to all within range of a television. Agents Jensen & Marsh must escort the Kerry family outside the city limits, shielding them from quarantine crews and the cults looking to bring the infected Melissa into their ranks.

Written by Eisner Award-nominated author Cullen Bunn (Harrow County, Bone Parish) and illustrated by artist Jesús Hervás (Lucas Stand), Manifestation is the third installment in The Empty Man franchise, bringing the haunting story of the Kerry family to a close.

As of 2018, Bunn writes X-Men: Blue and Venomized for Marvel, PumpkinHead for Dynamite, Subspecies for Action Lab, Shadow Roads for Oni Press, Regression for Image, Unholy Grail, Brothers Dracul and Dark Ark for Aftershock Comics, Empty Man with BOOM! Studios, and Harrow County for Dark Horse.
Loading...
or support indie stores by buying on
(This book is on backorder)