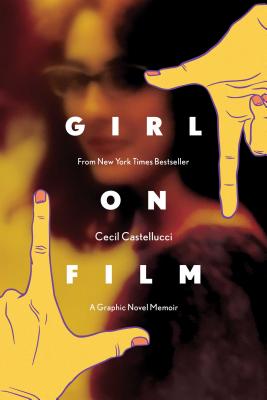 Follow novelist Cecil Castellucci in this insightful memoir of making art, the nature of memory, and being a teenager in 80s New York City.

One thing young Cecil was sure of from the minute she saw Star Wars was that she was going to be some kind of artisté. Probably a filmmaker. Possibly Steven Spielberg. Then in 1980 the movie Fame came out. Cecil wasn’t allowed to see that movie. It was rated R and she was ten. But she did watch the television show and would pretend with her friends that she was going to that school. Of course they were playing. She was not. She was destined to be an art school kid.

Chronicling the life of award-winning young adult novelist, and Eisner-nominated comics scribe Cecil Castellucci (Shade the Changing Girl, Star Wars: Moving Target), Girl On Film follows a passionate aspiring artist from the youngest age through adulthood to deeply examine the arduous pursuit of filmmaking, while exploring the act of memory and how it recalls and reshapes what we think we truly know about ourselves.

Praise for Girl on Film
More than a life story, it's an account of how to live an artist's life even when it looks like your artistic ambitions are grandiose and impractical. In fact, Castellucci shows, your artistic ambitions are pretty much guaranteed to be grandiose and impractical. That doesn't matter. What matters is how you live with your big dreams, what you give up for them, what you hang onto and what you let go. - NPR

...a story that's simultaneously sweet and provoking: more than a mere autobiography, Girl on Film demands that we ask ourselves how we narrate our own life and its meaning. - Boing Boing

Cecil Castellucci is the author of books and graphic novels for young adults including Boy Proof, The Plain Janes, Soupy Leaves Home, The Year of the Beasts, Tin Star, and the Eisner nominated Odd Duck. In 2015 she co-authored Moving Target: A Princess Leia Adventure.  Out in 2018 is Don’t Cosplay With My Heart.  She is currently writing Shade, The Changing Girl, an ongoing comic on Gerard Way’s Young Animal imprint at DC Comics.   Her short stories and short comics have been published in Strange Horizons, Tor.com, Womanthology, Star Trek: Waypoint and Vertigo SFX: Slam! She is the Children’s Correspondence Coordinator for The Rumpus, a two time Macdowell Fellow and the founding YA Editor at the LA Review of Books. She lives in Los Angeles.
Loading...
or support indie stores by buying on