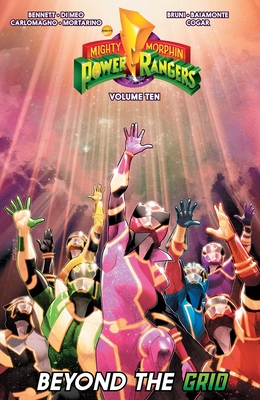 BEYOND THE GRID concludes here as the Solar Rangers – an all-new Power Rangers team unlike any other – must face the deadly Praetor for the final time, in a battle that no one will walk away from unscathed!

THE STUNNING CONCLUSION TO BEYOND THE GRID! The Solar Rangers – an all-new Power Rangers team unlike any other – have defied the villainous Praetor and survived. But their victory may be short-lived, as deadly forces move to stop them from regaining their full powers and finding a way home. It’s the final battle between Solar Rangers and their deadliest enemy as the shocking truth behind the Praetor is revealed – and the fates of two galaxies hang in the balance.

New York Times Bestselling author Ryan Parrott is a writer in multiple mediums. A graduate of Chapman University, Ryan has written on television series NBC's REVOLUTION and Hulu's CHANCE. In comics, Ryan was a co-writer on DC's BATMAN: GATES OF GOTHAM, several of IDW's STAR TREK titles, including STARFLEET ACADEMY, BOLDLY GO and MANIFEST DESTINY, as well as the NBC series finale REVOLUTION: ENDGAME. He is currently writing both MIGHTY MORPHIN POWER RANGER and SABAN'S GO GO POWER RANGERS for Boom Studios, as well as his creator-owned projects VOLITION and OBERON for Aftershock Comics, and lives in Los Angeles with his wife.
Loading...
or support indie stores by buying on