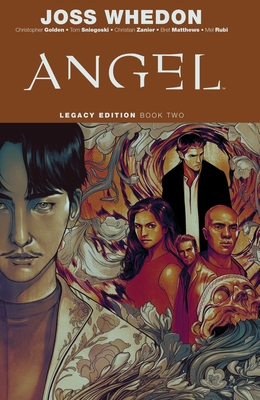 A new collection of out of print and rare official Angel stories taking place during the first two seasons of the show, including a never-collected story from visionary creator Joss Whedon himself!

FROM JOSS WHEDON (CREATOR OF BUFFY THE VAMPIRE SLAYER) COMES THE OFFICIAL TIE-IN TO THE CRITICALLY ACCLAIMED ANGEL TELEVISION SERIES! Set during the first two seasons of the Angel television series, discover the rare and out of print stories that reveal the untold history of Angel Investigations - including a never reprinted story by visionary creator Joss Whedon! Experience the epic “Past Lives” comic book event, as a new enemy decimates Angel Investigations, sending Angel back to Sunnydale to find the one person who can help him... Buffy! But with a horde of deadly enemies on his tail and shocking secrets about their connection to one of the Scooby Gang, it’ll take everything Angel and Buffy have got to save the day...if they can first survive this super awkward reunion. It can’t go any worse than the last time they were together, right? Collects Angel #11-17, Buffy the Vampire Slayer #29-30, Angel: Long Night's Journey #1-4, along with stories from Dark Horse Extra. Legacy Editions collect for the first time every issue of the most popular BOOM! Studios series in chronological order, in a newly designed, value priced format.