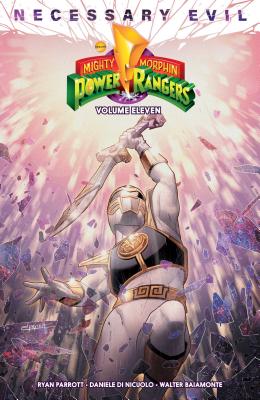 POWER RANGERS: NECESSARY EVIL BEGINS HERE! The Mighty Morphin Power Rangers are back in Angel Grove…with the White Ranger as their leader! But what happened to the team after they defeated Lord Drakkon? And what does the White Ranger’s first appearance mean for the future of the team?

New York Times Bestselling author Ryan Parrott is a writer in multiple mediums. A graduate of Chapman University, Ryan has written on television series NBC's REVOLUTION and Hulu's CHANCE. In comics, Ryan was a co-writer on DC's BATMAN: GATES OF GOTHAM, several of IDW's STAR TREK titles, including STARFLEET ACADEMY, BOLDLY GO and MANIFEST DESTINY, as well as the NBC series finale REVOLUTION: ENDGAME. He is currently writing both MIGHTY MORPHIN POWER RANGER and SABAN'S GO GO POWER RANGERS for Boom Studios, as well as his creator-owned projects VOLITION and OBERON for Aftershock Comics, and lives in Los Angeles with his wife.
Loading...
or support indie stores by buying on