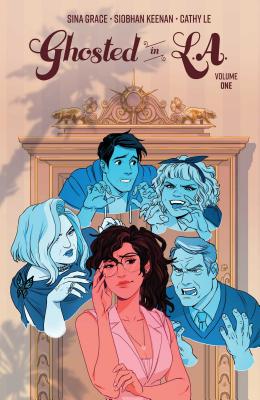 Daphne Walters moves to Los Angeles and finds that the only ones who can help her find love and live life to the fullest are the ghosts of her new home!

In Los Angeles, finding an apartment is killer—unless you live with the dead. Daphne Walters moves to Los Angeles for her boyfriend Ronnie, ready to live her happily ever after. But when happily ever after turns into happily for a month, she’s stuck in a strange city with no friends, family, or prospects for fun. Desperate to escape the lingering ghost of Ronnie’s presence everywhere, Daphne sets out to explore the city—and ends up encountering ghosts of a more literal kind! Rycroft Manor is abandoned, beautiful, and haunted. Will the dead be able to help Daphne find the life she’s been missing in the big city? From GLAAD Award-nominated Sina Grace (Iceman) and illustrator Siobhan Keenan (Jem and the Holograms) comes a story about learning how to make friends, find love, and live life to the fullest with a little help from some friends whose lives didn't end at death. Collects Ghosted In L.A #1-4.

Sina Grace is a writer and artist living in Los Angeles, CA who has earned prestigious nominations for both the GLAAD Media Awards and the PRISM Awards. He is best known for his slice-of-life memoirs at Image Comics, including Self-Obsessed and Nothing Lasts Forever; the highly anticipated reimagining of Jughead's Time Police at Archie Comics; and the critically-acclaimed, landmark Iceman series at Marvel Entertainment. Grace has been a part of the Power Rangers comic book series at BOOM! Studios from day one, illustrating variant covers for the chart-topping Mighty Morphin Power Rangers #1, along with both writing & illustrating one of the comic book stories celebrating the 25th anniversary of the pop culture phenomenon in 2018. Ghosted in LA, Grace’s new original series at BOOM! Studios, will launch in July 2019.
Loading...
or support indie stores by buying on