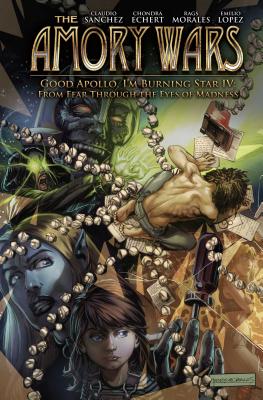 Music superstar Claudio Sanchez of Coheed and Cambria fame returns in the long-awaited continuation of The Amory Wars, an epic science fiction comic adaptation of the band's albums.

The evil Wilhelm Ryan remains in power while those surrounding Claudio Kilgannon are convinced he is The Crowing. Ambellina believes she and The Crowing can save Heaven’s Fence rather than destroying it. But with Ryan and a new, even bigger threat looming—will they succeed?

Meanwhile, in Heaven's Fence, a collection of 78 planets held in place by interconnecting beams of energy known as the Keywork, Coheed & Cambria Kilgannon's son Claudio struggles against the Supreme Archmage Wilhelm Ryan while attempting to assume the mantle of The Crowing, foretold savior of Heaven's Fence.