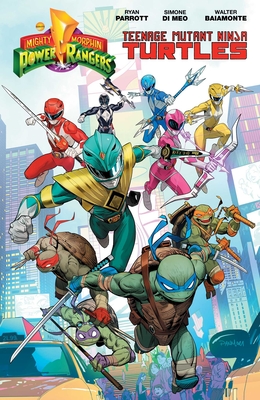 The Mighty Morphin Power Rangers and Teenage Mutant Ninja Turtles meet for the first time ever in the comic book fight - and team up - of the year!

THE TEENAGERS WITH ATTITUDE MEET THE HEROES IN A HALF SHELL FOR THE FIRST TIME!

The Power Rangers arrive in New York City to find their missing teammate Tommy Oliver – AKA The Mighty Morphin Green Ranger – but soon discover he’s joined forces with the villainous Shredder and the Foot Clan! But the Rangers must also deal with another unexpected (fr)enemy – the Teenage Mutant Ninja Turtles! Can these heroes find a way to work together to defeat the bad guys and save the world from total destruction?!

Written by Ryan Parrott (Power Rangers: Necessary Evil) and illustrated by Simone di Meo (Power Rangers: Beyond The Grid), the Mighty Morphin Power Rangers fight – and maybe team up with – the Teenage Mutant Ninja Turtles for the first time ever.

New York Times Bestselling author Ryan Parrott is a writer in multiple mediums. A graduate of Chapman University, Parrott has written on television series NBC's Revolution and Hulu's Chance. In comics, Ryan was a co-writer on DC's Batman: Gates of Gotham, several of IDW's Star Trek titles, including Starfleet Academy, Boldly Go and Manifest Destiny, as well as the NBC series finale Revolution: Endgame. Parrott was one of the key architects of the landmark Power Rangers: Shattered Grid comic book event and currently writes Saban’s Go Go Power Rangers at BOOM! Studios, along with creator-owned projects Volition and Oberon for Aftershock Comics.
Loading...
or support indie stores by buying on