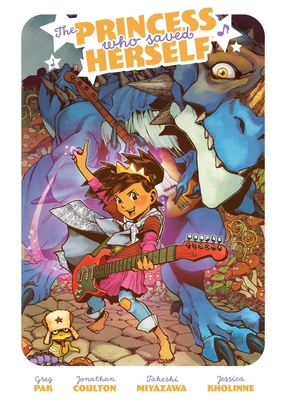 The Princess Who Saved Herself

Welcome to The Princess Who Saved Herself, a children's book written by comics writer Greg Pak, based on the beloved song by internet superstar musician Jonathan Coulton, and illustrated by artist Takeshi Miyazawa.

The Princess Who Saved Herself reinvents the princess myth for a new generation, telling the story of an awesome kid who lives with her pet snake and plays rock 'n' roll all day to the huge annoyance of the classical guitarist witch who lives down the road. Hijinks, conflicts, and a fun reconciliation ensues!

Based on the beloved song by internet superstar musician Jonathan Coulton, the new New York Times best-selling team of writer Greg Pak and artist Takeshi Miyazawa reunite for an unforgettable adventure full of determination, bravery, and compassion for everyone!

Greg Pak is a New York Times best-selling author behind the Planet Hulk storyline that inspired the hit film Thor: Ragnarok. He’s earned acclaimed with best-selling stories featuring all the biggest characters in comics - such as Superman, X-Men, James Bond, Star Wars and more - along with creating exciting new additions to those universes, like breakout character Amadeus Cho. Recently, Pak completed his popular original series Mech Cadet Yu at BOOM! Studios, which has earned accolades from the New York Public Library, YALSA and the Junior Library Guild. An official continuation of the popular cult favorite TV series Firefly.
Loading...
or support indie stores by buying on