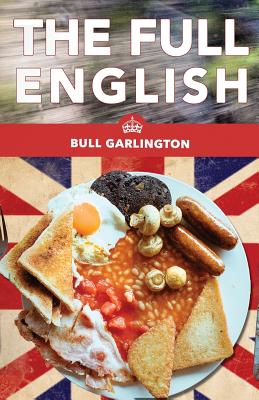 A Chicago Family's Trip on a Bus Through the U.K. - With Beans

The Full English is the hilarious story of a father's failed attempt to take his family on a once-in-a-lifetime trip to the United Kingdom, a disastrous trip ruined by his stratospheric expectations, his inner American, ennui fatigue, his wife's meddling in his perfect plans, Alabama, his children's massive indifference, the Doctor Who experience, ginger cookie based chemical warfare, mimes, sheep, The Beatles, a hermetically sealed bus full of the elderly, a militant librarian, and England's classic breakfast which consists almost entirely of canned beans.

This is not a guide book. It isn't Fodor's or a Lonely Planet guide. God knows such literature would be quite helpful if you plan, like the author, to take your family on an epic journey. The Full English won't. Not even a little. It will teach you diddly squat about Jolly Olde England. Instead, it will lead you deeper and deeper into the author's pervasive bad attitude, arrogant disregard for the comfort of his fellow traveling companions, and a sense of humor which is best described, and we're being diplomatic here, as juvenile, puerile, egotistical, arrogant, narcissistic, and ever so slightly, just the teensy-weensiest bit culturally insensitive and perhaps borderline racist to Brits, Scots, Irish, Canadians, and the Japanese.

You'll watch helplessly as your author falls prey to coach tour comforts and the narcoleptic effect of the U.K.s endless supply of roadside sheep herds, sleeping through 90% of his trip of a lifetime. You'll be on the edge of your seat as he rails against the Beatles and (for some reason) Erskine Caldwell. Finally, you'll rally alongside him as he prepares himself for mortal combat, facing an enemy far beyond his skill set, the nemesis we meet in the very beginning of the trip who menaces him every step of the way, and whom he must, somehow, triumph over, the angriest librarian in the world, the meanest old lady on the bus, and Garlington's arch enemy: Mildred.