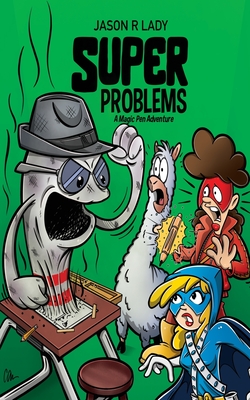 Scott draws the comic book adventures of himself, Blue Hood, and their friends as the Alpaca Defense Squad fighting their archenemy the evil Stinky Sock. No one knows Scott's using a magic pen and everything he draws becomes real. The middle schoolers and an alpaca named Bruce are thrown into a real-life superhero adventure At first, they think it's great. They're living their superhero fantasy What more could superhero fans want? But saving the day is not as easy as it looks

The Stinky Sock is a clever nemesis, and Bruce the alpaca is obnoxious and demanding. The Alpaca Defense Squad must unite as a team, master their powers, put up with Bruce, and solve their super problem... before the Stinky Sock rules the world