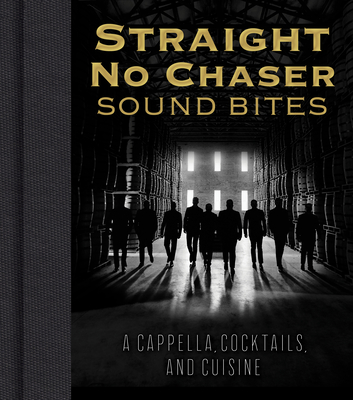 A Cappella, Cocktails, and Cuisine

With 15 years in the music business, eight albums, and more than 1.5 million concerts tickets sold, Straight No Chaser treasures two things: family and food. Straight No Chaser Sound Bites features a collection of their favorite food and drink recipes combined with behind-the-scenes stories as they welcome their fans into the family.

Formed in 1996 at Indiana University, Straight No Chaser's story has been replete with twists and turns. Sound Bites deliciously recounts members' memories of moments from an unlikely yet wonderful cascade of events that propelled forward their career of creating music, touring, and becoming part of countless family traditions.

Straight No Chaser Sound Bites invites the group's many fans, old and new, to celebrate the harmony of music, food, and drink in their own homes. So settle in and enjoy.

Straight No Chaser is a musical phenomenon with a massive fan base and a long list of accomplishments, including two RIAA Certified Gold albums, more than 1.5 million concert tickets sold, 1 billion streams on Pandora, and 1 million albums sold worldwide. Straight No Chaser is the real deal: the captivating sound of unadulterated voices making extraordinary music that moves people in a fundamental sense . . . and with a sense of humor.
Loading...
or support indie stores by buying on
(This book is on backorder)