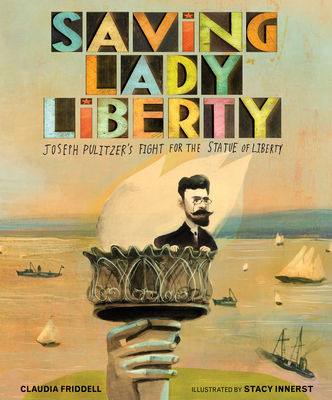 Here is the story of how the Statue of Liberty got its pedestal when Joseph Pulitzer, a Jewish immigrant and famous newsman, created one of the first American crowdfunding campaigns to raise money for it.

When Joseph Pulitzer first saw the Statue of Liberty's head in Paris, he shared sculptor Auguste Bartholdi's dream of seeing France's gift of friendship stand in the New York harbor. Pulitzer loved words, and the word he loved best was liberty. Frustrated that many, especially wealthy New Yorkers, were not interested in paying for the statue's needed pedestal, Pulitzer used his newspaper, the New York World, to call on all Americans to contribute. Claudia Friddell's text and Stacy Innerst's illustrations capture this inspiring story of how one immigrant brought together young and old, rich and poor, to raise funds for the completion of a treasured national monument.

Claudia Friddell was inspired to write Saving Lady Liberty after seeing the sculpture of Joseph Pulitzer on Liberty Island and learning of his historic crowd-funding campaign. She loves the magic of bringing history to life and is the author of George Washington's Spies and Goliath: Hero of the Great Baltimore Fire.

Stacy Innerst is the award-winning illustrator of multiple picture books, including Ruth Bader Ginsburg by Jonah Winter, The Music in George's Head by Suzanne Slade, and Thomas Jefferson Grows a Nation by Peggy Thomas. Visit stacyinnerst.com.

★ "In this soaring account, which spans Pulitzer's birth in Hungary to Lady Liberty’s debut in 1886, the author highlights both Pulitzer's rags-to-riches personal success story and his profound idealism: he 'had always loved words. And the word he loved best was liberty.' Innerst adds to the high tone of this celebration with impressionistically brushed scenes of Lady Liberty’s grand features, her frail-looking champion bouncing back from multiple reverses, and ordinary people pitching in coins and small bills to see the iconic statue raised at last. Though histories of the Statue of Liberty often mention Pulitzer’s campaign, this is the most detailed presentation for younger audiences to date. Just another immigrant getting the job done." —Booklist, starred review

"A poor Jewish immigrant who understood what liberty meant crusaded for Lady Liberty's pedestal. This is a well-written, inspiring ode to the contributions of immigrants. Pulitzer quotes and excerpts from some of his editorials are included; particularly wonderful are replicas of some handwritten letters from children who donated, literally, pennies. Atmospheric illustrations in brown and blue brushed on sepia-toned backgrounds give a historical feel... excellent information about Pulitzer and the Statue of Liberty... appears in the backmatter. Pulitzer's permanent legacy now beams a beckoning welcome to all American newcomers—a timely reminder." —Kirkus Reviews

"This nonfiction picture book sheds light on Joseph Pulitzer’s connection to Lady Liberty and his role in bringing the American icon to the United States. Young readers will particularly enjoy reproductions of donation letters from kids, pledging money to support the cause. Innerst uses watercolor and acrylic paint, with some ink drawings. Back matter includes fun facts about the Statue of Liberty and Pulitzer, a bibliography, an afterword, a time line, and photos of the statue during its construction and inauguration. (T)his [biography] is a good jumping-off point for discussions of civic responsibility and philanthropy." —School Library Journal

"Friddell... [focuses] on New York World newspaper owner Joseph Pulitzer’s rags to riches backstory as a poor Hungarian immigrant who fought for the Union in the Civil War, worked odd jobs before his break into journalism, and used his public influence to cajole Americans into supporting Frederic Bartholdi’s monumental beacon. Innerst’s mixed media artwork, rendered in tan and sepia evocative of an era antedating color news coverage, have an airy, slightly hazy lightness that contrasts well with the weight of Liberty’s component copper parts scattered throughout scenes, awaiting their ultimate reassembly. Nine pages of end matter...could pivot a recreational read into a middle-grade research project." —The Bulletin of the Center for Children's Books
or support indie stores by buying on
Copyright © 2020 American Booksellers Association