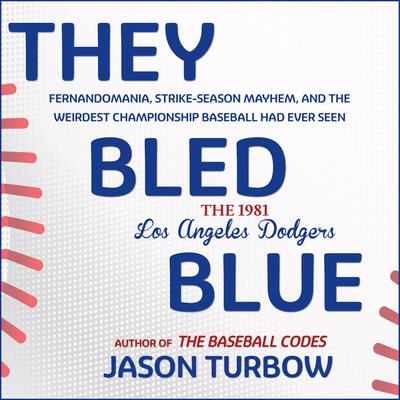 They Bled Blue is the rollicking yarn of the Los Angeles Dodgers' crazy 1981 season, a watershed campaign that cemented the team's place and reputation as fitting thoroughly within the surrounding LA culture. That it culminated in an unlikely World Series win—during a split season demarcated by a strike, no less—is not even the most interesting thing about this team.

The Dodgers were led by the garrulous Tommy Lasorda, whose office hosted a regular stream of Hollywood royalty. They had Steve Garvey, the first baseman with the movie-star good looks. Garvey was teamed with Ron Cey, Davey Lopes, and Bill Russell in the most durable infield in major league history, with 1981 presenting their final chance to win a championship as a unit. The difference maker was entirely unexpected twenty year old and nearly straight out of Mexico, with a wild delivery and a screwball as his flippin' out pitch. Fernando Valenzuela didn't speak much English, but his baseball ability broke down cultural barriers and helped fill Dodger Stadium to the brim with a Southern California Latino population that had been thirsting for just such a success story.

Jason Turbow is the author of the best-selling The Baseball Codes: Beanballs, Sign Stealing and Bench-Clearing Brawls: The Unwritten Rules of America's Pastime. He has written for the New York Times, the Wall Street Journal, and SI.com.