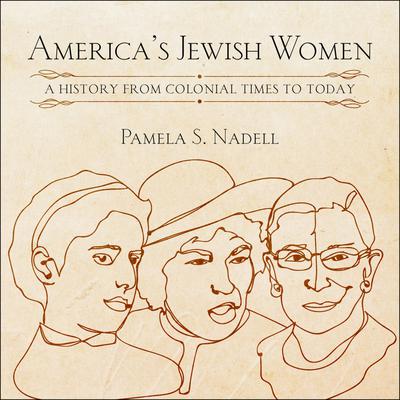 A History from Colonial Times to Today

A groundbreaking history of how Jewish women maintained their identity and influenced social activism as they wrote themselves into American history.

What does it mean to be a Jewish woman in America? In a gripping historical narrative, Pamela S. Nadell weaves together the stories of a diverse group of extraordinary people—from the colonial-era matriarch Grace Nathan and her great-granddaughter, poet Emma Lazarus, to labor organizer Bessie Hillman and the great justice Ruth Bader Ginsburg, to scores of other activists, workers, wives, and mothers who helped carve out a Jewish American identity.

The twin threads binding these women together, she argues, are a strong sense of self and a resolute commitment to making the world a better place. Nadell recounts how Jewish women have been at the forefront of causes for centuries, fighting for suffrage, trade unions, civil rights, and feminism, and hoisting banners for Jewish rights around the world. Informed by shared values of America's founding and Jewish identity, these women's lives have left deep footprints in the history of the nation they call home.

Suzanne Toren is an actor who has appeared on and off Broadway, in regional theaters, and occasionally on TV. Over a period of several decades, she has narrated close to 1000 audiobooks for most major publishers. She has received multiple Audie nominations and many industry awards, including Narrator of the Year and Best Voices of the Year. Making beautifully crafted writing come alive is her passion; she is honored and thrilled to have been able to earn a living doing it.