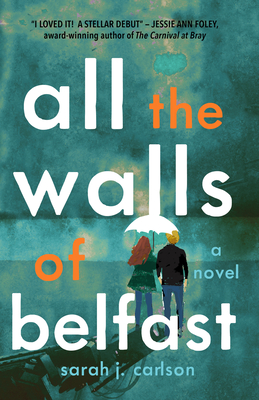 All the Walls of Belfast (Paperback)

The Carnival at Bray meets West Side Story in Sarah Carlson's powerful YA debut; set in post-conflict Belfast (Northern Ireland), alternating between two teenagers, both trying to understand their past and preserve their future. Seventeen-year-olds, Fiona and Danny must choose between their dreams and the people they aspire to be.

Fiona and Danny were born in the same hospital. Fiona's mom fled with her to the United States when she was two, but, fourteen years after the Troubles ended, a forty-foot-tall peace wall still separates her dad's Catholic neighborhood from Danny's Protestant neighborhood.

Fiona was about to start a summer job to pay for a field study, her golden ticket into MIT. But then a letter from her allegedly deadbeat dad reveals he's always wanted to be in her life. Fiona returns to Belfast, where she learns the bloody truth her mother sheltered her from--her seemingly sweet father was a bomb maker for the Irish Republican Army during the Troubles. Now there's only one person Fiona can count on, her older half-brother, Patrick.

Danny's alcoholic father wants him to join the Loyalist paramilitary like him, but Danny dreams of making his deceased mother proud by becoming a nurse in the British Army. To reach his officer test and escape his father's abubse forever, Danny must find a way to earn a hundred twenty quid for a plane ticket without getting a criminal conviction. And make sure his father doesn't discover his plan.

After chance brings Fiona and Danny together, their love of the band Fading Stars, big dreams, and desire to run away from their families unites them. Danny and Fiona must help one another overcome the burden of their parents' pasts. But one ugly truth might shatter what they have...