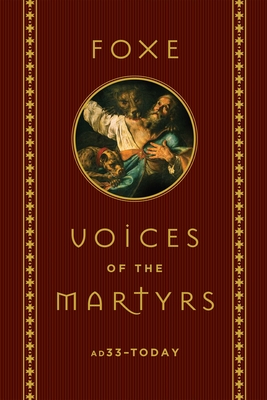 Voices of the Martyrs: AD33 – Today

By John Foxe, The Voice of the Martyrs

What would you do for the cross of Christ?

For two thousand years, Christians have courageously triumphed over beatings, stonings, burnings, wild beasts, and every form of evil to boldly proclaim one truth: the name of Jesus.

Voices of the Martyrs AD 33 – Today is their story and your Christian heritage.

In the 16th century, English preacher John Foxe created what would later be called the “second most important book in history” after the Bible: Foxe’s Book of Martyrs. With dozens of images, modernized English, and up-to-date accounts, Foxe: Voices of the Martyrs faithfully binds the testimonies of more than 50 of Foxe’s heroes from the Early Church to the Reformation with Christians in the Enlightenment, the Industrial Revolution, and through the twentieth century.

More importantly, Foxe: Voices of the Martyrs unites past Christians with believers today. Building on over fifty years of ministry to persecuted Christians, The Voice of the Martyrs organization shares sixty-seven stories of Christians who have stood faithfully to the death since 2000. Their courage in the face of ISIS and the Taliban, brutal dictatorships, and government crackdowns will inspire you to boldness and remind you that the same Spirit of Christ Who strengthened Stephen, Peter, and Paul is at work in you today.

The Voice of the Martyrs is a nonprofit, interdenominational Christian missions organization dedicated to serving persecuted families worldwide through practical and spiritual assistance and leading other members of the body of Christ into fellowship with them. VOM was founded in 1967 by Pastor Richard Wurmbrand, who was imprisoned for 14 years in Communist Romania for his faith in Christ; his wife, Sabina, was imprisoned for three years. In 1965 they were ransomed out of Romania, and soon thereafter they established the global network of missions of which VOM is a part. VOM is based in Bartlesville, Oklahoma.
or
Buy Here
Copyright © 2020 American Booksellers Association