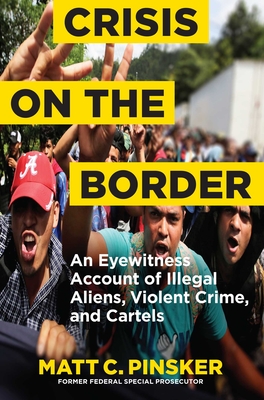 Crisis on the Border (Hardcover)

An Eyewitness Account of Illegal Aliens, Violent Crime, and Cartels

What he saw in Laredo changed his life, and his riveting account of the breakdown of law and order will change how you think about border security. Crisis on the Border reveals:

- That drug cartels are in control of the U.S.-Mexican border

- That U.S. courts are generally more lenient with illegal aliens than they would be with American citizens

- The hypocrisy behind the "children in cages" stories

- Solutions: how to solve the crisis on the border

Earnest, shocking, and revealing, Crisis on the Border is essential for understanding one of the greatest problems confronting our country.

Matt C. Pinsker is a criminal defense attorney, a captain in the United States Army Reserve, and an adjunct professor of law at Virginia Commonwealth University. He earned his undergraduate degree from the College of William & Mary, his J.D. from West Virginia University, and his LL.M. in National Security and U.S. Foreign Relations from the George Washington University Law School. He lives with his family in central Virginia.
or
Buy Here
Copyright © 2020 American Booksellers Association