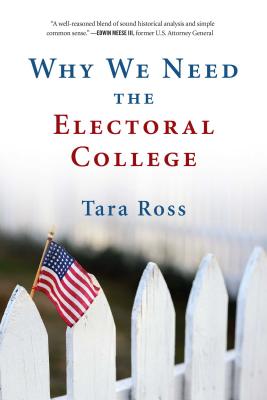 Why We Need the Electoral College

Is the Electoral College anti-democratic?

Some would say yes. After all, the presidential candidate with the most popular votes has nevertheless lost the election at least three times, including 2016.

To some Americans, that’s a scandal. They believe the Electoral College is an intolerable flaw in the Constitution, a relic of a bygone era that ought to have been purged long ago.

But that would be a terrible mistake, warns Tara Ross in this vigorous defense of “the indispensable Electoral College.” Far from an obstacle to enlightened democracy, the Electoral College is one of the guardrails ensuring the stability of the American Republic.

In this lively and instructive primer, Tara Ross explains:

Every four years, the controversy is renewed: Should we keep the Electoral College? Tara Ross shows you why the answer should be a resounding Yes!

Tara Ross is a lawyer and writer who focuses on the intersection among law, public policy, and constitutional history. She often appears as a guest on a variety of talk shows nationwide to discuss these matters and regularly addresses civic, university, and legal audiences. Her work has been published in several law reviews and newspapers, including the National Law Journal, USA Today, the American Enterprise Online, National Review Online, WeeklyStandard.com, FoxNews.com, HumanEvents.com, The Washington Times, and the Texas Review of Law & Politics. She is the author of Enlightened Democracy: The Case for the Electoral College, co-author of Under God: George Washington and the Question of Church and State, and We Elect A President: The Story of our Electoral College.
Loading...
or support indie stores by buying on