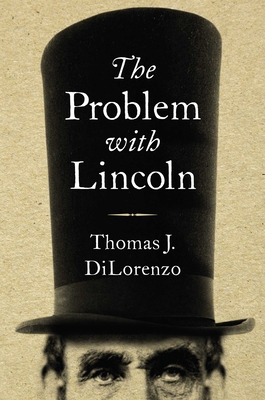 The Problem with Lincoln (Hardcover)

So many thousands of books deifying Abraham Lincoln have been published that it is nearly impossible for the average citizen to learn much of anything that is truthful about Lincoln's presidency.

This book should create doubt in anyone’s mind over the designation of Abraham Lincoln as America’s greatest president. Some may even decide that he was the worst.

You'll learn that Lincoln promised to protect slavery forever in his first inaugural address by endorsing the “Corwin Amendment” to the Constitution, which would have prohibited the federal government from ever interfering with Southern slavery. It should rightly be known as Lincoln’s “slavery forever” speech.

You'll learn that the real reason why Lincoln launched an invasion of his own country (he never admitted that secession was legal or legitimate) was to destroy the voluntary union of the founders and replace it with a coerced union held together by violence and threats of violence, much more like the old Soviet Union than the original American union.

You were probably not taught in school that by waging total war on Southern civilians and bombing Southern cities into a smoldering ruin, Lincoln violated all moral codes and international law regarding waging war on civilians and opened the door the horrific atrocities of twentieth-century warfare.

Thomas J. DiLorenzo is a professor of economics at Loyola University, Maryland, and a senior fellow at the Ludwig von Mises Institute. He has written for the Wall Street Journal, Barron’s, the Washington Post, USA Today, and many other publications, and is the author of several popular books, including The Problem with Socialism, Hamilton’s Curse, The Real Lincoln, and How Capitalism Saved America. He divides his time between Maryland and Florida.
or support indie stores by buying on
Copyright © 2020 American Booksellers Association