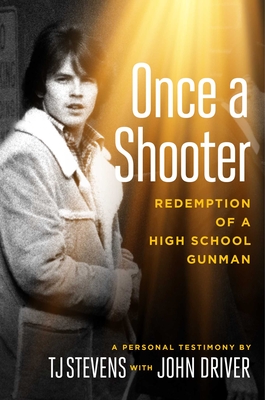 Redemption of a High School Gunman

“This is my story. You see, I was once a shooter.”

Twice pardoned—first by God and later by the state—TJ Stevens now walks in freedom and grace. At first, reluctant to tell his story but compelled now to share what God has done, he gives a firsthand account, four decades later, of what it was like to be a high school shooter.

What makes his story different from all the others that have commanded headlines over the last twenty-odd years? How did he not only make it out alive, but go on to have a successful life when so many other high school shooters are now behind bars or in the grave?

What happened during that day-long hostage standoff—and in the years that followed—took TJ out of suffocating darkness and into the light.

In Once a Shooter: Redemption of a High School Gunman you will see that:

TJ Stevens (then known as James Stevens) was a disturbed young man who opened fire inside his Virginia high school in 1982, injuring no one. After doing time in prison and being miraculously paroled, he embarked upon a remarkable journey that included playing the role of Jesus in a national-acclaimed Passion play in Washington D.C. and other major cities, and working in various music and video production roles on multiple projects in television and film. A songwriter and singer, he has performed on many military bases, at many music venues around the country, and even at the American Country Music Awards.

TJ lives in Winchester, Virginia with his wife. He has two children and five grandchildren.
Loading...
or
Not Currently Available for Direct Purchase