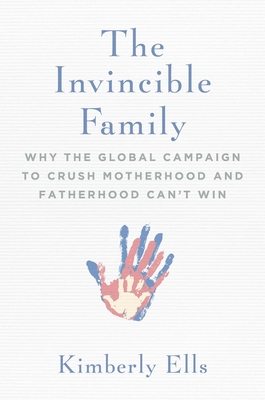 Why the Global Campaign to Crush Motherhood and Fatherhood Can't Win

The Fight for the Family

Socialists and feminists have long targeted the family as an enemy, even the enemy. For socialists, the family is an obstacle to the full power of the progressive state. For feminists, the family denies female independence and equality. Today, however, the battle has grown even fiercer, as socialists and feminists have found a global ally in the United Nations, which is using its extraordinary power to undercut the authority and the sanctity of the family around the world—even in the United States. International policy advisor Kimberly Ells exposes this unholy alliance between globalist liberals, feminists, and socialists, and unveils the shocking harm being done, right now, to women and children in America and around the world. In The Invincible Family you’ll learn:

-How, in the name of “equality,” women are actually losing what should be inherent rights

-Why there is still hope that the unholy alliance of feminists, socialists, and liberals can be defeated

The Invincible Family is a shocking and essential report on how your family could be threatened— and what you and all concerned citizens can do to defend the institution of the family and our inherent human rights.

Kimberly Ells is an avid researcher and writer on family issues and has worked as a policy advisor for the past nine years. Kimberly has written for The Federalist, Townhall, Life Site News, The New American, The Epoch Times, MercatorNet, the Daily Signal, and other outlets. She has also spoken at venues across the country, including the United Nations. Kimberly graduated from Brigham Young University with a degree in English. She is married and is the mother of five children.
Loading...
or support indie stores by buying on