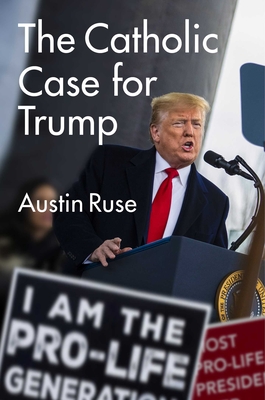 The Catholic Case for Trump

Catholics are under enormous pressure to denounce Donald Trump. The Catholic vote can decide an election, and liberals—including many high-ranking churchmen—are desperate to discourage the faithful from supporting the most pro-Catholic president in history.

It can be difficult to separate fact from fiction when trying to vote according to one’s faith. Catholic “progressives,” hoping to advance an agenda at odds with much of Church teaching, try to blur our moral obligations.

The famously pithy and provocative Austin Ruse offers refreshing clarity, exposing the dishonesty of liberal Catholics and explaining why the central commitments of the faith point Catholic voters to President Trump.

In The Catholic Case for Trump you’ll learn:
• How Trump has done more for religious freedom than any other president
• Why Donald Trump’s character protects Catholics in a culture hostile to religious belief
• The false arguments the Catholic Left uses to support the Democrats’ radical social agenda
• Where the latest culture war battles are being fought and how they affect Catholics’ ability to live their faith

The Catholic Case for Trump is a rallying cry for the faithful and essential to understanding what is at stake for Catholics in the 2020 election.

AUSTIN RUSE is the president of the Center for Family and Human Rights, a research institute based in New York and Washington, D.C., focused exclusively on international social and legal policy. He is the author of Fake Science: Exposing the Left’s Skewed Statistics, Fuzzy Facts, and Dodgy Data (Regnery Publishing, 2017) and Littlest Suffering Souls: Children Whose Short Lives Point Us to Christ (Tan Books, 2017). He is a Knight of Malta, a Knight of the Holy Sepulchre, and a Son of the American Revolution.
Loading...
or support indie stores by buying on