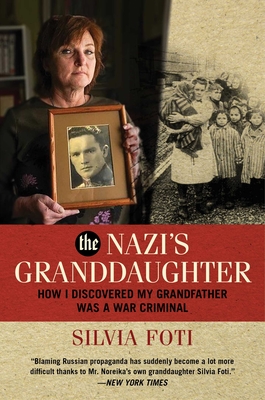 How I Discovered My Grandfather was a War Criminal

A deathbed promise leads a daughter on an incredible journey to write about her grandfather who was a famous war hero. But this journey had a terrible destination: the discovery that he was a Nazi war criminal.

Foti had no idea that in keeping her promise to her mother, her discoveries would bring her to a personal crisis, unearth Holocaust denial, and expose an official cover-up by the Lithuanian government that resulted in an internationally-followed lawsuit.

Jonas Noreika was a Lithuanian known as General Storm. He led an uprising that won the country of Lithuania back from the communists, only to have it fall under Nazi control. He was an official during the Holocaust and chief of the second largest region in the country during the Nazi occupation, yet he became a prisoner in a Nazi concentration camp. Foti set out to write a heroic biography about her famous grandfather.  But as she dug ever deeper, she “encountered so much evidence proving my flesh and blood ‘hero’ was a Jew-killer, even I could no longer believe the lie.”

The Nazi's Granddaughter is Foti’s first-hand account of her journey, which began as an act of family pride and ended with uncovering the secret her family, and an entire nation, had kept hidden for 79 years. It addresses:

Silvia Foti is a journalist, teacher, wife, and mother living in Chicago, IL. She holds Masters degrees in Journalism, Education, and Creative Non-fiction, and has written two books. She has been published in Salon.com, Chicago Tribune, Southtown Economist, and has won awards for her investigative journalism.
Loading...
or support indie stores by buying on