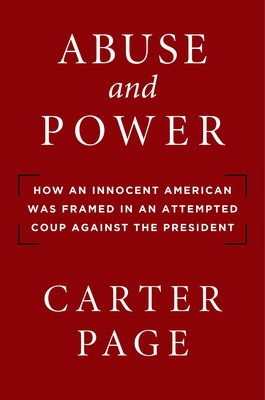 Behind the Smoke and Mirrors

Carter Page was—and is—a model American citizen. A graduate of the U.S. Naval Academy and a successful businessman, he even served his country clandestinely as a source for America’s intelligence services.

But all that was not enough to protect Carter Page when he had the temerity to support Donald Trump for president.

Page’s role as a foreign policy advisor to the campaign was minor—he never even met Donald Trump—yet he became a target of the FBI and career Justice Department officials who wanted to harass Trump the candidate and then unseat Trump the president. In Abuse and Power, Carter Page himself tells the shocking and sordid story for the first time.


Taking you behind the establishment’s smoke and mirrors, Abuse and Power reveals the truth about Carter Page, a private citizen who found himself in the midst of a real-life spy story. The Democratic Party, the media, and their entrenched allies in the Justice Department and intelligence services lied, subverted justice, and violated every code of decency to frame an honest American patriot.

Carter Page, Ph.D., is founder and managing partner of Global Energy Capital in New York and Global Natural Gas Ventures in Oklahoma City. Specializing in energy and foreign policy, he is engaged in nationwide legal initiatives to repair and protect American democracy. Page graduated with distinction from the U.S. Naval Academy, where he was a Trident Scholar. He holds an M.B.A. from New York University’s Stern School of Business, an M.A. in national security studies from Georgetown University, and a doctorate from the University of London’s School of Oriental and African Studies.
Loading...
or support indie stores by buying on