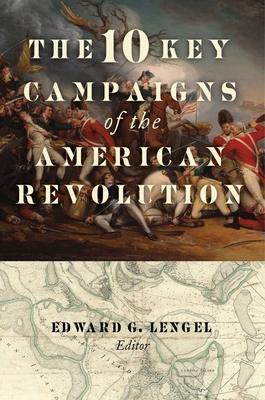 The 10 Key Campaigns of the American Revolution

A Nation is Born

Lexington, Bunker Hill, Saratoga, Washington, Hamilton, Benedict Arnold. All familiar names, but how did they all fit together? How did merchants, lawyers, farmers, and cobblers come together to defeat the British Empire, its powerful navy, and its Hessian auxiliaries? For that matter, who were the Hessians, and what is an auxiliary?

These historians guide you through the fateful decade of the 1770s in British America. In 1776, you battle in Brooklyn Heights, then cross the Delaware with Washington. In the late summer and fall of ’77, you bushwhack down the Champlain Valley with Johnny Burgoyne. You struggle through winter with Washington and his beleaguered troops in Valley Forge. When the spring of ’78 turns to summer, you endure the oppressive heat and the massive battle on New Jersey farmland at Monmouth Courthouse. In 1780 your journey takes you south into a bloody civil war—Tory versus patriot, neighbor versus neighbor in Georgia and the Carolinas. Finally, in ’81, you join the patriots as they maneuver north into Virginia, whereWashington and the French navy can trap the British on the Yorktown Peninsula.

Complete with maps and suggested further reading, The 10 Key Campaigns of the American Revolution is a short course in one of history’s most consequential wars, explaining how citizens became soldiers and how their dedication, determination, and force of will defeated the world’s greatest power and launched a nation like no other.

EDWARD G. LENGEL is senior director of programs at the National World War II Museum’s Institute for the Study of War and Democracy. He received his Ph.D. from the University of Virginia, where he was a full professor and directed the Washington Papers Project for many years. He wrote the new history of Colonial Williamsburg as a “Revolutionary in Residence.” Lengel has written fourteen books on American history, including General George Washington: A Military Life, and Never in Finer Company: The Men of the Great War’s Lost Battalion. Lengel is a co-recipient of the National Humanities Medal and has won two writing awards from the Army Historical Foundation.
Loading...
or support indie stores by buying on