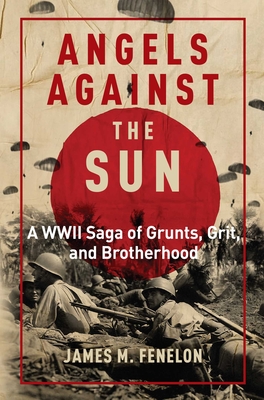 Angels Against the Sun

A WWIl Saga of Grunts, Grit, and Brotherhood

In the tradition of Band of Brothers, historian and former paratrooper James M. Fenelon offers a grunt’s-eye view of the 11th Airborne’s heroic campaign to liberate the Philippines in World War II. A soldier’s history at its best.

The Pacific War in World War II pitted American fighting men against two merciless enemies: the relentless Japanese army and the combined forces of monsoons, swamps, mud, privation, and disease.  The rowdy paratroopers of the 11th Airborne Division—nicknamed “The Angels”—answered the call and fought in some of World War II’s most dramatic campaigns, ranging from bloody skirmishes in Leyte’s unforgiving rainforests to the ferocious battles on Luzon, including the hellscape urban combat of Manila. General Joseph Swing’s men were trained as elite shock troops, but high American casualties often forced them into action as ground-pounding infantrymen. Swing kept them supplied by airdropping food, ammunition, medical teams, and reinforcements over nearly impassable terrain, and the Angels fought on, emerging as one of the most lethal units in the Pacific War. Their final task was the occupation of Japan, where they were the first American boots on the ground.  Angels Against the Sun provides an unforgettable soldiers’ perspective of America’s hard-won victory in the Pacific.

James Fenelon is a paratrooper turned historian. He served in the U.S. Army for more than a decade and is a graduate of the U.S. Army’s Airborne, Jumpmaster, and Pathfinder schools. His previous book, Four Hours of Fury: The Untold Story of World War II’s Largest Airborne Invasion and the Final Push into Nazi Germany, was widely praised; the Wall Street Journal called it “inspired” and the Army Times called it “a riveting account.” He has written for World War II magazine, Military History, and other outlets, and served as a technical advisor for World War II documentaries. An alumnus of the University of Texas at Austin, Fenelon and his wife live in the Texas Hill Country.