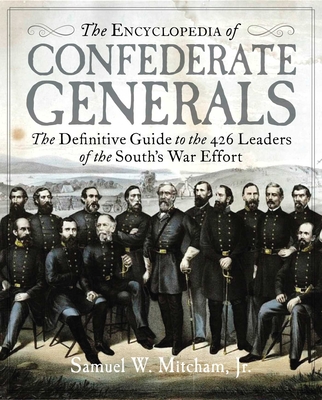 The Encyclopedia of Confederate Generals

A renown military historian and frequent television commenter brings to life the generalship of the South during the Civil War in sparkling, information-filled vignettes. For both the Civil War completist and the general reader!

Anyone acquainted with the American Civil War will readily recognize the names of the Confederacy’s most prominent generals. Robert E. Lee. Stonewall Jackson. James Longstreet. These men have long been lionized as fearless commanders and genius tacticians. Yet few have heard of the hundreds of generals who led under and alongside them. Men whose battlefield resolve spurred the Confederacy through four years of the bloodiest combat Americans have ever faced.

In The Encyclopedia of Confederate Generals, veteran Civil War historian, Samuel W. Mitcham, documents the lives of every Confederate general from birth to death, highlighting their unique contributions to the battlefield and bringing their personal triumphs and tragedies to life.

Packed with photos and historical briefings, The Encyclopedia of Confederate Generals belongs on the shelf of every Civil War historian, and preserves in words the legacies once carved in stone.

SAMUEL W. MITCHAM JR. is a military historian who has written extensively on the Civil War South, including his book It Wasn’t About Slavery. A U.S. Army helicopter pilot in the Vietnam War and a graduate of the Command and General Staff College, he remained active in the reserves, qualifying through the rank of major general. A former visiting professor at the U.S. Military Academy, West Point, he has appeared on the History Channel, CBS, NPR, and the BBC. He lives with his family in Monroe, Louisiana.
Loading...
or support indie stores by buying on