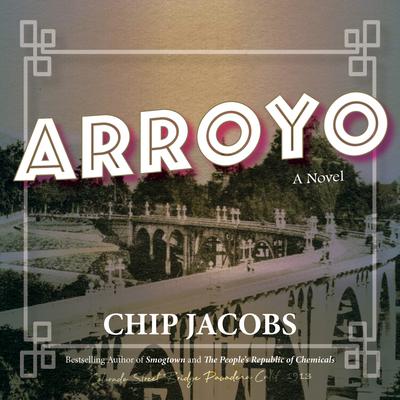 Set against two distinct epochs in the history of Pasadena, California, Arroyo tells the parallel stories of a young man and his dog in 1913 and 1993. In both lives, they are drawn to the landmark Colorado Street Bridge, or "Suicide Bridge," as the locals call it, which suffered a lethal collapse during construction but still opened to fanfare in the early twentieth century automobile age. When the refurbished structure commemorates its eightieth birthday, one of the planet's best known small towns is virtually unrecognizable from its romanticized, and somewhat invented, past.

Wrought with warmth and wit, Jacobs's debut novel digs into Pasadena's most infamous structure and the city itself. In their journey to discover the source of the bridge's macabre alter ego, Nick Chance and his impish mutt interact with some of the big personalities from the Progressive Age, including Teddy Roosevelt, Upton Sinclair, Charles Fletcher Lummis, and Lilly and Adolphus Busch. They cavort and often sow chaos at Cawston Ostrich Farm, the Mount Lowe Railway, the Hotel Green, and even the Doo Dah Parade.

While digging up the truth about the Colorado Street Bridge, in all its eye-catching grandeur and unavoidable darkness, the characters of Arroyo paint a vivid picture of how the home of the Rose Bowl got its dramatic start.

Joel Richards was the kid who did crazy things just to have a good story to tell afterward. On deciding to make his affection his profession, he received a BFA in acting and a BA in English from the University of Utah, and later an MA in oral storytelling from East Tennessee State University. He has narrated over 150 audiobooks (fiction and nonfiction) and continues to tell his original stories to live audiences.