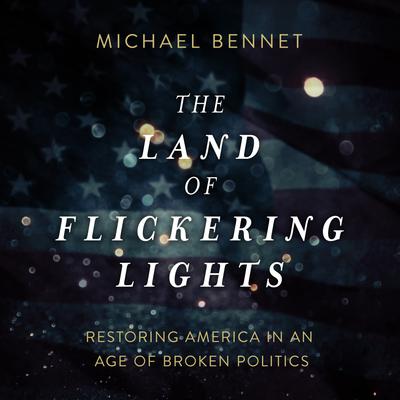 The Land of Flickering Lights is a unique contribution to American political writing at this or any other time. Democratic Senator Michael Bennet from Colorado lifts a veil on Congress to reveal, in his words, "through a series of actual stories—about the people, the politics, the motives, the money, the hypocrisy, the stakes, the outcome—the pathological culture of the capitol and the consequences for us all."

Bennet eloquently chronicles the dramatic full stories behind five debates and decisions crucial to all Americans: the highly politicized nominations and appointments of judges at all levels; the recent tax cut that massively increased our debt and financial inequality across the country; the shredding of the Iran nuclear deal that undermined our longstanding bipartisan approach to foreign policy; the corruption caused by money in politics and why it has caused inaction on climate change and much else; and the ugly sabotage by a minority of the "Gang of Eight's" bi-partisan plan to reform our immigration policies, which would have resolved all the issues we currently face.

By revealing how these decisions were truly made, Bennet sheds vital new light on each of these five crucial events and what Americans have lost in the process, illuminating how and why our government is at loggerheads today.

Michael Bennet has represented Colorado in the United States Senate since 2009. Recognized as a pragmatic and independent thinker, he has built a reputation for taking on Washington dysfunction to address our greatest challenges-including education, climate change, immigration, health care, and national security. When not in Washington he lives in Denver with his wife and three daughters.