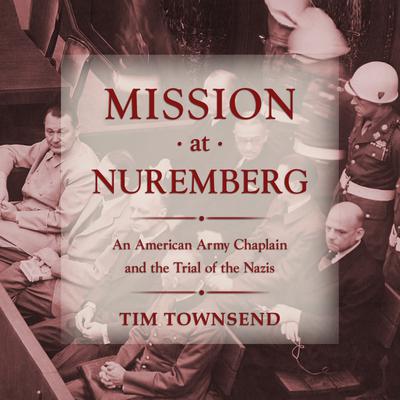 Mission at Nuremberg is Tim Townsend's gripping story of the American Army chaplain sent to save the souls of the Nazis incarcerated at Nuremberg, a compelling and thought-provoking tale that raises questions of faith, guilt, morality, vengeance, forgiveness, salvation, and the essence of humanity.

Lutheran minister Henry Gerecke was fifty years old when he enlisted as an Army chaplain during World War II. As two of his three sons faced danger and death on the battlefield, Gerecke tended to the battered bodies and souls of wounded and dying GIs outside London. At the war's end, when other soldiers were coming home, Gerecke was recruited for the most difficult engagement of his life: ministering to the twenty-one Nazi leaders awaiting trial at Nuremburg.

Based on scrupulous research and first-hand accounts, including interviews with still-living participants, Mission at Nuremberg takes us inside the Nuremburg Palace of Justice, into the cells of the accused and the courtroom where they faced their crimes. As the drama leading to the court's final judgments unfolds, Tim Townsend brings to life the developing relationship between Gerecke and Hermann Goering, Albert Speer, Wilhelm Keitel, Joachim von Ribbentrop, and other imprisoned Nazis as they awaited trial.

James Anderson Foster was one of those kids that actually lettered in drama way back in High School (and if you ask nicely, he might even tell you just how far back that was). Since that time, he's done most of his acting behind a microphone, and has narrated audiobooks for a variety of publishers, across nearly all genres-both fiction and nonfiction. He was born and raised on the west coast, and even though he's lived in the Midwest for over a decade now, still considers Oregon "home." In 2015, James was a finalist in three categories for the Society of Voice Arts and Sciences Voice Arts Awards (Mystery, Science Fiction, and Fantasy). James has been praised for his conversational delivery and ability to sound exactly like the voice you were imagining in your head.