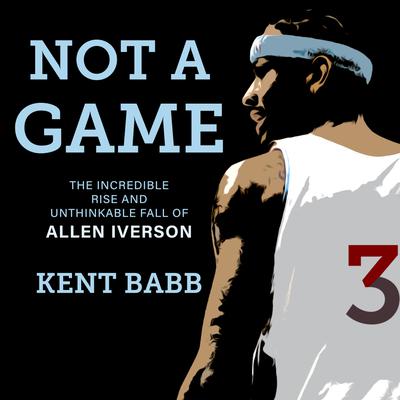 Not a Game (Digital Audiobook)

Through extensive research and interviews with those closest to Iverson, acclaimed Washington Post sportswriter Kent Babb gets behind the familiar, sanitized, and heroic version of the hard-changing, hard-partying athlete who played every game as if it were his last.

Former NBA superstar Allen Iverson was once one of America’s most famous athletes: a trendsetter who transcended race, celebrity, and pop culture, and emerged from a troubled past to become one of the most successful and highly compensated athletes in the world. Now, his life and career come vividly to light in this “searingly honest” (Baxter Holmes) biography.

Babb brings to life a private, loyal, and often generous Allen Iverson who rarely made the headlines, revealing the back story behind some of Iverson's most memorable moments, such as his infamous "Practice" rant, delving even deeper to discover where Iverson's demons lurked. He drank too much, stayed out too late, spent more money than most people could spend in a dozen lifetimes—blowing more than $150 million of his NBA earnings alone. His then wife Tawanna, seen often as the mild-mannered woman who tamed the bad boy, tried to keep her husband and family on the rails. But, as so many others learned on basketball courts, she was no match for the force of nature that was Iverson.

Michael Butler Murray is a professional actor, narrator, and musician who has voiced over fifty-five audiobooks. His recorded titles run the spectrum from dramatic to comedic fiction and nonfiction titles varying in topics from the Middle East to understanding your dog's olfactory senses. Born on Long Island, New York, he has been performing his entire life. Over the past few decades, he has performed in slews of musicals, dramas, and improv shows across the country, has appeared in several films, and performs regularly with his guitar comedy duo, Schoolcraft & Murray. He loves stretching his legs in the great outdoors, sailing, surfing and, naturally, sitting in a quiet box reading aloud.