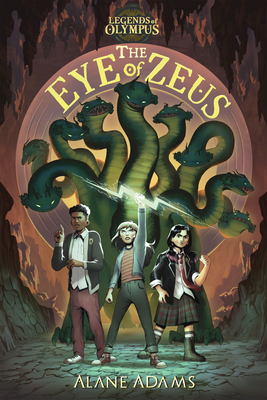 The Eye of Zeus (Paperback)

Legends of Olympus, Book One

"This charming and brilliant novel is superbly plotted and will win over readers . . . Phoebe's voice is dead on and authentic, as are those of her friends. The author's masterful prose and style serve the story instead of merely taking center stage . . . This author and novel are ready for prime time and the big time." --Publishers Weekly, BookLife Prize Critic's Report Meet Phoebe Katz, a twelve-year-old foster kid from New York City who's been bounced around the system her entire life. Things happen around Phoebe, but it's not like they're her fault But when a statue of Athena comes to life, Phoebe gets the stunning news she's the daughter of Zeus, has a twin brother named Perseus--and was sent away from ancient Greece as a baby to stop a terrible prophecy that predicted she would one day destroy Olympus. Athena warns Phoebe to stay in hiding, but when the vengeful god Ares kidnaps her beloved social worker, Phoebe has no choice--she has to travel back to ancient Greece and rescue him There, Phoebe and her friends Angie and Damian discover a new prophecy, one that may fix everything. The catch: Phoebe has to collect talismans from six Greek monsters, including the fang from a nine-headed hydra, a talon from the Nemean lion, and a feather from the sphinx. No problem for a girl with the power to call up lightning bolts and change the weather But can Phoebe collect them all and stop the prophecy before she destroys Olympus?

Alane Adams is an award-winning author, professor, and literacy advocate. She is the author of the Legends of Orkney fantasy mythology series for tweens and the new Witches of Orkney series, as well as The Coal Thief, The Egg Thief, The Santa Thief, and The Circus Thief picture books for early-grade readers. She lives in Orange, California.

Praise For The Eye of Zeus: Legends of Olympus, Book One…

Praise for The Eye of Zeus:

“This charming and brilliant novel is superbly plotted and will win over readers . . . Phoebe’s voice is dead on and authentic, as are those of her friends. The author's masterful prose and style serve the story instead of merely taking center stage . . . This author and novel are ready for prime time and the big time.”

Praise for The Witches of Orkney series:

“An enchanting new book full of magical mischief and adventure, Alane Adams’s The Blue Witch is guaranteed to please”

“Bright, brave characters star in this exhilarating tale of magic and mystical creatures.”

Praise for The Legends of Orkney series

“A fast-paced, satisfying capper to a trilogy that’s sure to enchant fans of adventure-driven fantasy.”

“Sam's internal struggles and focus on the dark side of his witch heritage are reminiscent of Anakin Skywalker and will likely appeal to fanboys and fangirls, particularly as he 'must face the darkness inside.' Combined with strong female leads, both heroic and villainous, the ever growing and changing cast of characters has something for everyone. Fantasy, mythology, a touch of romance, and enough sword fights and battles to appease even the most action-hungry make Kalifus Rising a well-rounded, solid choice for those craving a new type of adventure.”

“Adams is a master of exposition, never letting it slow the narrative by immersing it in rapid-fire dialogue . . . Indelible characters, both good and evil, and a rescue storyline that refuses to dawdle.”

“This series will do well with the Percy Jackson crowd and fans of Norse mythology. VERDICT: A great choice for middle school collections.”

“The Red Sun: Legends of Orkney by Alane Adams is a book that will take children on a roller coaster ride of adventure and fantasy where whimsical and menacing creatures and witches will enthrall readers.”

“The Red Sun is a roller coaster ride of adventure, Norse mythology, magic and mayhem. Between Sam facing awesome villains in the magical realm of Orkney to teachers turning into lizards, I had the best time doing the voiceover for the audiobook. Don’t miss out on this terrific story!”